A new trend in body art has been emerging over the last few years among celebrities in the West. Tattoos in Hindi and Sanskrit. Whether or not they know the meaning of the words, the language has certainly piqued their interest. And why shouldn't it? Sanskrit is a profound language.

So we bring to you our top picks of celebrities sporting Sanskrit on their skin.

A tattoo on her wrist that says 'Padma'.

The word you see tattooed on Jessica Alba's wrist here is the Sanskrit word Padma. It translates to lotus which symbolizes the beauty of one who has risen above the distractions of life, just as the lotus floats above the murk of the lake below it and still remains a thing of beauty. Tattooed below the nape of her neck is 'Om'.

Not the most creative tattoo we've ever seen, the word Om is inked just below the nape of the neck of the Who's The Boss star. Alyssa Milano has often spoken about her spiritual beliefs and the word Om apparently has a deep personal significance for her.

A verse in Pali on her left shoulder blade.

To mark the occasion of her son Maddox entering her life, Angelina Jolie got this tattoo on her back which is written in the Pali script. It translates to this:

May your enemies run away from you.
Your beauty will be that of Apsara
Where you may go, many will attend, serve and protect you, surrounding you on all sides.
If you acquire riches, may the remain yours always. An incorrectly spelled dedication to his partner, Victoria, on his left arm.

One of the more clichéd declarations of love, David Beckham got the name of his wife Victoria tattooed on his arm in Hindi. A fuss was raised over the name being spelled incorrectly, an embarrassing blunder on the part of the artist to be sure. But instead of having it changed, he kept it as is.

Above her right ankle is the word 'Abhay'.

Thankfully not followed by the word Deol. The Pitch Perfect star known for her typically good-girl roles, Brittany Snow has the word Abhay meaning 'one without fear' tattooed above her ankle. An unknown word in Hindi is tattooed on her wrist.

The idea she had was to have a word in Sanskrit tattooed on her wrist. What she got instead was a word in Hindi the meaning of which she does not know. Reportedly, she is often approached by Indians who ask her what it means to which she never has an answer. A clever tattoo of the word 'Om' which comes together when her hands do.

Her tattoo might be not be uncommon, but the style certainly is. When the former Disney princess presses her hands palm-to-palm, a namaste, the word Om is formed. Her reasons for the unusual placement of the tattoo was that she wishes to spread positive energy and to center it upon herself. A phrase in Sanskrit graces the back of this singer's neck.

The Pussycat Dolls singer has a Sanskrit tattoo on her neck which translates to this.

May all beings everywhere be happy and free and may the thoughts, words and actions of my own life contribute in some way to that happiness and to that freedom of all.

Interestingly enough, she chose to have the tattoo written phonetically in the English script. The word 'Tapas' is one of the many tattoos on Adam Levine's body.

The word Tapas features above Levine's left pectoral. When asked the meaning of the tattoo, he said that it meant inner fire or determination towards Yoga or any other practice. While the world has different meanings in different contexts, but to Levine it's about his own determination. An tiny speck of ink on her wrist forms the symbol for 'Om'.

Known predominantly for her unusual antics and outlandish videos, Cyrus too joined the Sanskrit tattoo club when she had the word Om tattooed on her wrist. The words 'Anuugacchatu Pravaha' are tattooed along her right bicep.

While dating Russell Brand, she decided to go along with the British actor to get a tattoo of Anuugacchatu Pravaha which means 'go with the flow'. Painful reminder or warm memory. Who knows? A verse from the Gita is tattooed down the side of her right leg.

Rihanna had a verse of the Bhagvad Gita tattooed on the right side of her waist down to her leg. What made this tattoo infamous, however, was that it was apparently a misquote as many Hindu scholars went on to fervently point out.

Small wonder they were angry. Must have been a drag looking at pictures of Rihanna's bare legs. The same as Katy Perry's, the phrase 'Anuugacchatu Pravaha' is tattooed along his right arm.

We already mentioned Katy so it might feel repetitive, but to anyone familiar with the two it should be clear as day whose idea is was. If there's one phrase that summarizes Brand, it would be go with the flow. 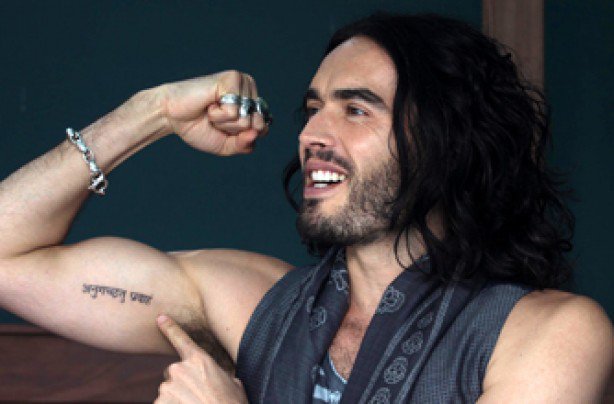 A heart-warming dedication to his family below his right hand.

"Beautiful, Blessed, Strong, Intelligent", dedicated respectively to his sister Hollie, his father Don, his brother Ashley, and his mother Lynn are the words tattooed on his wrist. This is a side of Theo we don't really get to see on the pitch and as an Arsenal fan I wouldn't mind if we did. It's 'Om'. Again. But at least the placement is unique.

Last but not least, we have Tommy Lee of Mötley Crüe. The symbol Om features, once again, is written right below his belly button. However, the contrast of the connotation associated with the word and Lee's own persona makes it a noteworthy addition. 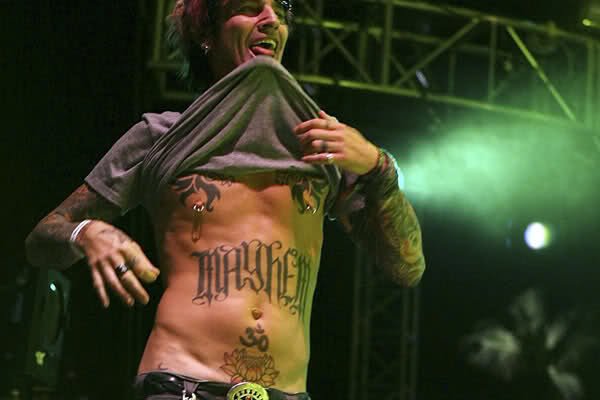 So there you go. These are our favorite celebrities who got inked in an Indian script. Did we miss any? Let us know.