All the many 'reality' shows that deal with man surviving the great outdoors with nothing but limited means and the mind of a survivor, make it look pretty easy. But the reality is far from what any show will give you. When you're at the mercy of mother nature, information - and we mean accurate information - is your best friend. And it is this information that is so hard to acquire when there are so very many myths about survival going around.

Well, we're here to bust some of these common myths that are often mistaken for facts. Because this is exactly where the difference between life and death lies. If someone gets bitten, try to keep the heart rate low and hold the affected limb below heart level while getting to a hospital. In most cases, a bear will warn you by making a noise or pretending to charge first. But if you find yourself in contact with a bear, it's important to know what kind it is as different kinds of bears inhabit different environments and therefore react to potential threats differently. The exact amount of time a person can spend without food varies based on the starting point and other health concerns, but it certainly doesn't have to be your biggest priority. The kind of cactus that holds consumable fluids, has to be identified carefully before filtering the liquid safely. It's common in certain climatic conditions for the north to be favourable to moss growth, but depending on the moss species and the local climate, moss can grow where conditions are most suitable.

Despite our shared biology, there’s still a massive difference between humans and other animals and how we process consumed items. Frostbite occurs when ice crystals form in your skin and other tissues. Rubbing or shocking the injury causes more tissue damage as the ice crystals lacerate new cells. The shark is far larger and stronger than the average human, so keep that in mind when defending against an attack from one. A rip current is scary, but swimming directly parallel to shore works best only if the current goes directly out to sea. Keeping yourself sheltered from the cold may involve anything from shielding yourself from the wind to insulating the cool ground for a 'bed'. Urine is full of the body’s waste products. More so in the case of an already dehydrated person. It should not be reintroduced into the human body under any circumstances. Conserving water is another mistake that people stuck in severe heat make. Keep yourself amply hydrated, and conserve water within the body instead of saving it for later.

This is another survival myth that can be pretty deadly. You see heroes doing this in movies, but it’s a bad idea. If there's another way to address the wound, that is exactly what you should do. Don't use a tourniquet unless you've exhausted all other options as you may end up doing more harm than good. Moreover, snowflakes contain more cold air than frozen water - in a ratio of about 9:1. So you'd have to consume a shitload of snow to really hydrate, which can only spell hypothermia. 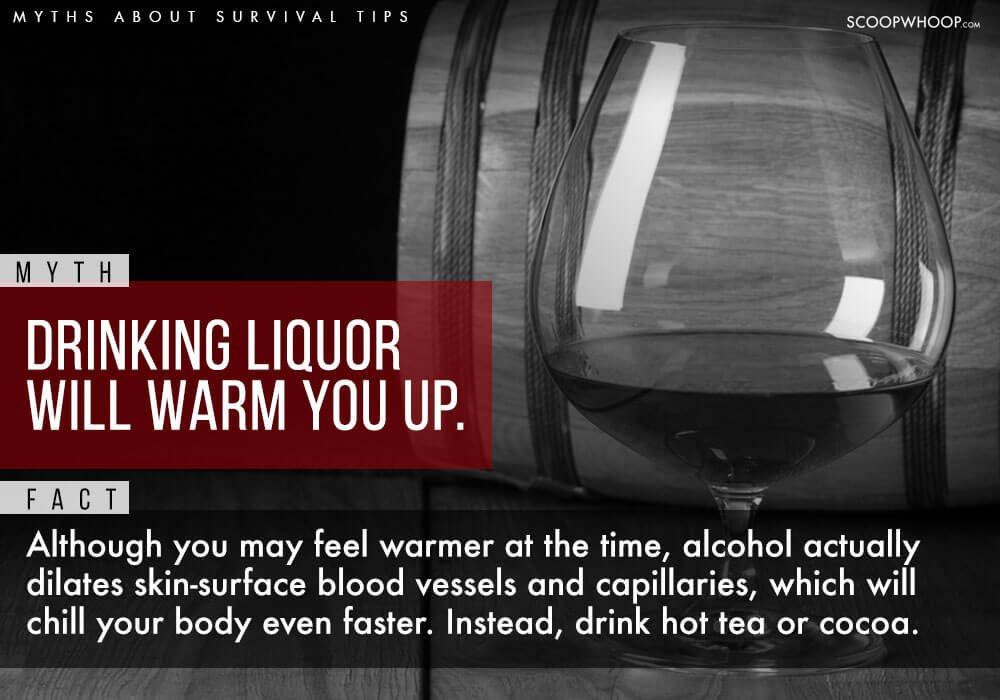 Alcohol will cause heat to radiate away from your body faster and you’ll end up colder than you were before you took a drink.

You are now slightly more equipped to survive whatever nature may throw at you. Just remember to thank us when one of these helps save your life someday!