It's bad enough looking at slimy creepy crawlies outside around us which give us chills down our spines and send us screaming for cover. They look evil and slimy and they can do terrible things to us. But it can get worse.

What if these icky crawlies got inside our body and made our warm bodies their home sweet home? What if they leached nutrients off our bodies and moved sneakily inside without us having a clue? We will let you savour that thought while we tell you about these parasites that can infect you.

Whipworms cause rectal prolapse, a condition in which the rectum hangs out of the anus.

The whipworm is so named because it resembles a cow whip and can grow up to about two inches. It is ingested by dirt mixed with human feces that are loaded with the whipworm's eggs. Children are prone to getting infected by the whipworm as they tend to crawl around in the dirt and cram their fingers in their mouths.

Whipworms can cause severe diarrhea, anemia and weight loss and in some cases can cause rectal prolapse, in which the walls of the rectum jut out from the anus. 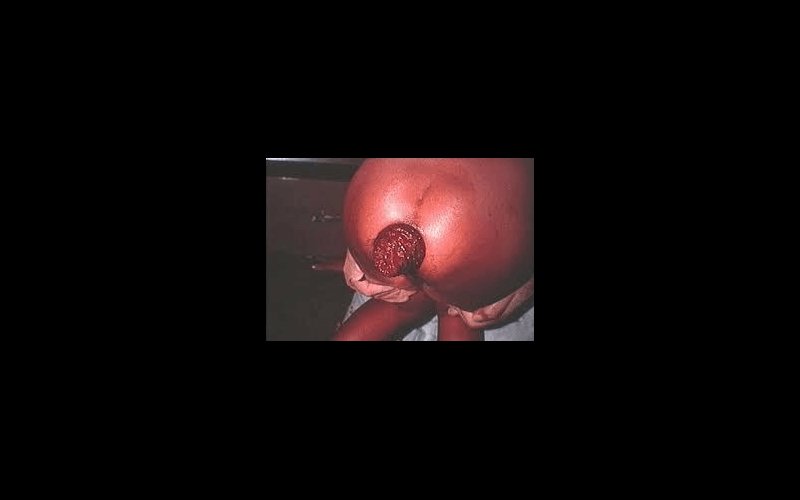 According to the National Institute of Allergy and Infectious Diseases, 800 million people in tropical countries are afflicted with whipworm.

This parasite can melt the cornea and cause blindness.

Though this is relatively rare, this can happen with people who wear lenses. Amoeba can exist in the space between the lens and the eyes and affect the cornea scarring it or turning it milky-white resulting in blindness. In some cases the cornea can even melt.

It starts out with the symptoms of common eye infections such as redness, hazy vision and sensitivity to light so it can be tricky to recognise the infection.

Avoid wearing lenses for long periods of time or showering or using hot tubs with them on.

Elephantiasis can lead to enormous swelling of the limbs and physical handicaps.

Roundworms can be transferred to the host by mosquitoes which then can live comfortably inside the host for up to eight years and produce millions of larvae during that period. This larvae gets mixed in the host's blood stream.

The effects of roundworm on the body is horrific. They attack the lymphatic system resulting in swelling of the limbs and thickening of skin. These lead to serious physical handicaps.

Around one billion people, mostly in Africa are affected by this out of which an astounding 40 million have been left disfigured. Chemotherapy is required to stop the spreading of the infection.

Guinea worms can cause blisters on feet through which they later emerge.

The guinea worm can be ingested when a person drinks impure water containing water fleas which are carriers of its larvae. Initially, it latches onto the intestinal wall but gradually enters body tissues. There are no apparent symptoms of the infection.

During the course of the year, a blister forms on the lower leg or the foot through which the worm emerges. If the worm is female and it comes in contact with water, she lays eggs again.

Infections by guinea worms are at a low due to improvement in drinking water standards.

These parasites cause jaundice and severe liver infections.

Resembling flatworms, these worms enter your body through polluted water or vegetables like watercress (which who would want to eat anyway?) They can also be in certain worm-infected fish. They travel through the intestines, through the abdomen and latch onto the bile ducts of the liver. With the slimy flatworm package comes free liver infections, severe stomach aches and jaundice. This continues for a while as the flatworms live up to 20 to 30 years.

It gets worse; they lag eggs like crazy, about every 30 seconds, and can cause cancer in the bile ducts. About 30 million people get affected by the liver fluke in Asia.

Hookworms can cause severe anemia.

Walking barefoot in grass might not seem like such a poetic idea anymore as hookworm larvae are present in mud mixed with human fecal matter. They migrate through the skin of the foot and then through the lungs into the trachea where the host swallows them. They pass into the digestive system and latch on to the intestinal wall from which they suck blood and can cause anemia and inflammation of the intestinal walls.

The larvae mature into adult worms and then have a mating festival in your digestive system. The female worm lays 30.000 eggs a day. These infections can last up to 5 years. It's easy to treat once diagnosed, but it's difficult to figure out the infection.

Botflies get into human tissues and latch on using the barbs on their bodies.

Botflies like hatching in human tissue. The cunning buggers attach their eggs to mosquitoes so that when they bite people the eggs hatch and larvae seep into human tissue. Sometimes larvae just wiggle into the human skin, using the barbs on their body to latch on securely.

The host may even be greeted by the sight of the larvae wiggling under his skin. Botfly infections exist in South America and Africa.

Pinworms emerge out of the rectum and lay eggs on the surrounding skin.

This one seems comparatively harmless. Pinworm is pretty common in people especially those living in temperate climate. Pretty much all kids catch the pinworm by - wait for it- taking in bits of fecal matter from other kids. Yuck.

Pinworms live in the colon and rectum and feed on the bacteria present in our feces. When children are asleep, the female pinworm emerges from the anus to lay eggs on the surrounding skin. The female pinworm measures about 0.5 inch. Those eggs are kinda itchy so children scratch themselves down there and then suck their thumbs and then touch other kids who suck their thumbs.. you get the picture.

This is for people who love pork. Tapeworms can be consumed when we eat raw or under cooked pork. Once in, they latch onto intestinal walls with suckers and feed on them, they can grow up to 20 feet. People can't know that they have tapeworms unless they see pieces of it in their feces.

Drinking water which is polluted by human feces with tapeworm eggs in them, can result in fatal head swelling, seizures and headaches.

Schistosomes can cause organ enlargement, scarring and even bladder cancer in some cases.

People with schistosomiasis swim in water and pass on the infection by urinating or defecating in water. Other people come in contact with them by swimming in the same water which has infected snails laying larvae in the water. The larvae enter through the skin and travel through the blood stream where they mature into worms about 0.6 inch long.

These worms then lay eggs which might reach the liver, lungs, intestines or bladder and cause scarring and enlargement of organs. Infections that are neglected can result in bladder cancer.

WHO reports that around 200 million people, mostly in Africa are plagued by these parasites.

Please excuse me while I barf and furiously fumigate my surroundings.