The fundamental cause of the trouble is that in the modern world the stupid are cocksure while the intelligent are full of doubt. - Bertrand Russell

Russell hit the right chord when he talked about the paradox of wise men and fools. Although it is not a mighty task to sift the wise men from the crowd, science says that there are ways of telling intelligent people from the no-so-intelligent ones. Researches and surveys across the world have pointed towards a few traits that will help you figure out if your fellow men (including you) exercise your grey cells in a special way.

Being intelligent is high maintenance. Among other factors it is also something that is acquired and involves hard work. In other words, apparently smartness and intelligence is earned. A person can be well versed on a topic but that does not necessarily make him intelligent. An intelligent person is able to talk about just about anything because he reads and learns about everything under the sun. 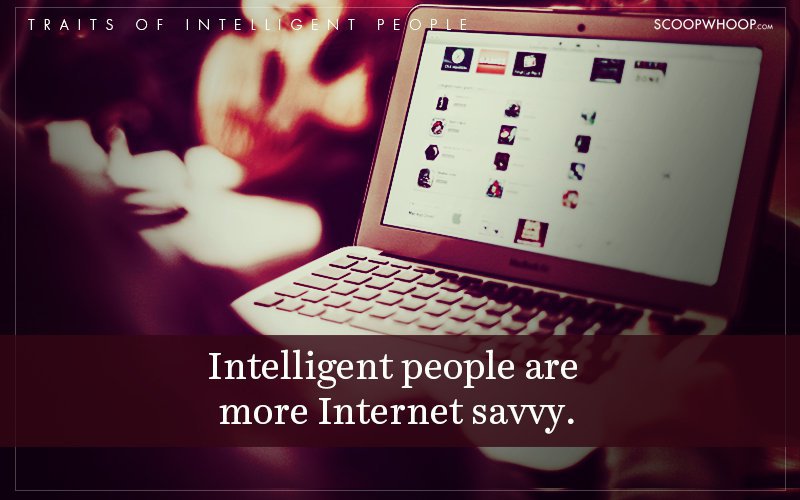 An online survey showed that more than three-quarters of people who undertook the survey believe that the Internet makes people smart. This idea stems from the fact that Internet dispenses knowledge impartially and has also improved reading and writing.

But a lot of the respondents also believe that it hinders the same by preventing deep thinking. This has more to do with evolution. "Sleep researchers tend to divide people into two groups, based on whether they exhibit 'morningness' or 'eveningness.' A recent study claims that eveningness is an evolutionary advancement that marks out 'more intelligent individuals,' while those with lower IQs tend to restrict their activities primarily to daytime" explains zoologist Robert Alison in the Winnipeg Free Press. As a study commissioned by Hewlett Packard says, infomania is turning out to be a grave problem for adult workers. It is a form of distraction caused by the constant urge to check mails or text messages and in return makes a person neglect almost everything from family to duties. As a report in PsychCentral suggests, "There is growing evidence that musicians have structurally and functionally different brains compared with non-musicians. In particular, the areas of the brain used to process music are larger or more active in musicians. Even just starting to learn a musical instrument can change the neurophysiology of the brain. The brain regions involved in music processing are also required for other tasks, such as memory or language skills." It is in the nature of intellectually sharper people to indulge in evolutionary novel behaviour. Does that mean that it is healthy? You can pick your side but it must be mentioned here that intelligent people do not necessarily indulge in healthy habits. As pointed out by Psychology Today, "more intelligent individuals are more likely to consume all types of psychoactive drugs than less intelligent individuals."

As mentioned in the Encyclopedia Britannica "For the most part, adaptation involves making a change in oneself in order to cope more effectively with the environment, but it can also mean changing the environment or finding an entirely new one." Intelligent people are thus, quick to adapt.

Not only the will to adapt, but the resistance to just about anything and everything is one trait of an intelligent mind. Although both these traits might seem to be at loggerheads, smart people have the ability to accommodate both the traits. They only believe when presented with ample facts.

Even the most mundane thing seems fascinating to the intelligent mind. The good news is curiosity is something that can be cultivated. If one researches on everything new they see or read about, they will form the habit of curiousness. This one might be a simple one. Intelligent people ask all the right questions. It just goes to show how fast and well their brain processes and accepts information. It also indicates that they have a working knowledge of a lot of things and are highly observant. This is just a smart and effective way of coping with things. Not for nothing have people stated over and over again that instead of letting your mistakes get to you and make the voice in your head louder, it is fruitful and valuable to learn from them and move on. Intelligent people seem to have a working knowledge of just about everything. Resourcefulness is also a sign of evolution. Mankind has not reached so far without putting available resources to use.

This is to understand that not knowing something does not make one stupid. Intelligent people see it as an opportunity to learn more about things that they may not be familiar with.

This has more to do with their skepticism. Unless and until they are presented with hard facts, they do not take things on face value.

Empathy is a core element of emotional intelligence. Emotionally intelligent are not only interested in learning about experiences of others, they also understand the need and feelings of others very intimately.