India is no stranger to matrimonial advertisements. However, the most recent ad doing the rounds of social media is as shocking as it is strange.

A Twitter user has uploaded the photo of a matrimonial ad where a 37-year-old man is reportedly seeking a wife who has to aspirational but 'strictly younger than 26 years'. And this not even the most absurd part.

The bride has to be a 'Non-feminist' & good cook. However, caste & religion are no bar. pic.twitter.com/c2Dw1vbCP9

The ad continues with the statement that the girl absolutely has to be a 'non-feminist'.

Although we can not verify the source of the image, the content is problematic, to say the least.

The people on Twitter called out the post and apparently even contacted the person on the email shared, only to receive highly disturbing responses.

Also someone has sent a mail to him from a fake id. And thats his reply. So a potential rapist as well. pic.twitter.com/lfuI6SNXsr

The alleged reply that the man posted in response to the aforementioned mail was intimidating to say the least.

(The image below contains graphic language. To view the reply, click the image to flip it.) 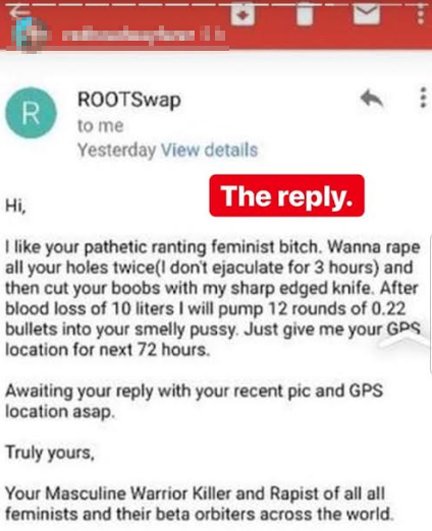 While the legitimacy of the original ad and the supporting responses cannot be verified, there is no ignoring the fact that the ad is anything but normal!