Who doesn’t like horror movies? Don’t answer that. That was a rhetorical question. I know that everybody does, especially when they are Ramsay Brothers horror movies. We all love to be scared out of our wits every now and then. We all enjoy the small thrill of an unknown entity spooking us out.

So, if you’re also looking for something scary to watch on the weekend, Try this,

The premise of the film was simple. A young couple travelling across a forest comes across a mansion and decides to spend the night there. Don’t ask why. They conveniently decided to sleep outside the mansion. Not inside, but outside. And that’s when the hairiest monster known to mankind attacks them and as expected, kills them. The rest of the story is about how they hunt down the monster who lives in a bigger house than you can ever afford. But that opening sequence alone should give you the motivation to watch it.

Purani Haveli was released in 1989 and has an IMDb rating of 5.2. You can watch it on Amazon Prime Videos or YouTube.

It’s not my fault everything that they do turns out to be ‘purana’. The film deals with a devil worshiper called Samri who was beheaded by a king 200 years back. The king, for some strange, kinky reason, keeps his head in a box with him. Now, 200 years later, guess who comes back to life? It’s Samri!

Ramsay Brothers’ Purana Mandir was released in 1984 and has a 6.4 rating on IMDb. You can watch it on Amazon Prime Videos or YouTube.

Okay, this, arguably, was one of Ramsay brothers’ scarier movies. Of course, the soundtrack helped considering it was given by none other than Bappi Lahiri. The film’s premise was simple. A girl, possessed by an evil spirit makes it her life’s mission to seduce and kill men.

Admit it, this doll-eyed girl gave nightmares to every 90s kid back then.

Veerana was released in 1988 and is one of Ramsay Brothers best horror movies. It has an IMDb rating of 6.6 and is available on YouTube.

Released in 1986, Ramsay Brothers’ Tahkhana took property disputes to another level. A good-for-nothing son who’s ousted from the family fortune, vows to make everybody’s lives miserable using black magic. Also, it’s perhaps the only horror movie in Indian cinema history where the ghost is wearing shoes. And also engages in hand-to-hand combat with the hero.

This Ramsay Brothers’ horror movie has an IMDb rating of 5.4 and is available on YouTube.

Before Brendan Fraiser’s The Mummy and Tom Cruise’s The Mummy reboot, there were the Ramsay brothers terrifying the shit out of the aam junta with a Mummy. Yep, that’s exactly what the premise of this masterpiece was. I mean it was the year 1987. And it had a legit Mummy in it. What more do you want?

It has an IMDb rating of 5.4 and is available on Zee5.

Okay, first things first. The Dracula in this film was called ‘Neola’. And it doesn’t get any cooler than that. Neola just wants two things in life: blood and young women. The film also stars Aruna Irani doing I don’t know what. The film is about people trying to get rid of Neola but you can watch it for the hottest exorcist ever.

Bandh Darwaza was released in 1990 and has an IMDb rating of 5.3. You can watch it on YouTube.

Released in 1975, Andhera was one of Ramsay brothers’ early works. The film was more like a mixture of The Texas Chainsaw Massacre and A Nightmare On Elm Street as a mysterious figure with fangs and claws terrorizes a bunch of people. 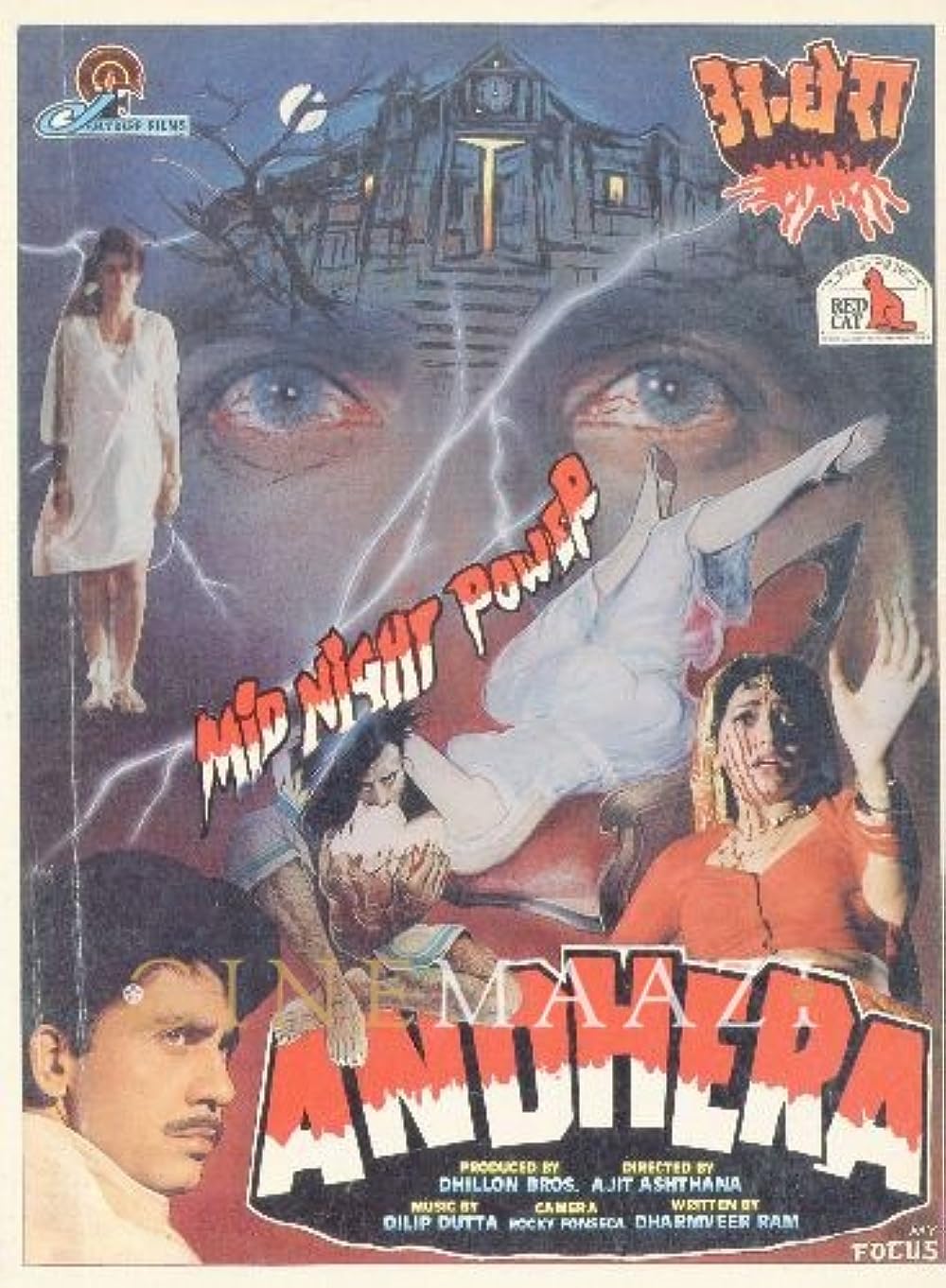 Andhera has an IMDb rating of 5.7 and is available on YouTube.

Saamri was an accomplishment of sorts considering it was India’s first horror film in 3D. Seriously, even on a non-3D screen, it looks 3D. The storyline was simple. Saamri, a wealthy man is killed by his greedy relative. He then comes back to life to avenge his death and protect his niece. Yes, the ghost is a protector.

The Ramsay Brothers horror movie was released in 1985 and has an IMDb rating of 5.7. You can watch it on YouTube.

Looks like the Ramsay brothers were making zombie flicks way before Walking Dead. Released in 1972, Do Gaz Zameen Ke Neeche tells the story of Rajvansh, who becomes a zombie after he accidentally drops some chemicals into his milk. And then drinks it. That’s some Powerpuff Girls shit right there.

This movie has an IMDb rating of 6.2 but it’s not available on any of the streaming services.

Remember Tim Burton’s Corpse Bride in which a guy accidentally marries a dead woman? Well, that’s exactly what the Ramsay brothers had done – 26 years before Burton. Oh, and the title track for it was sung by none other than Lata Mangeshkar.

This movie was released in 1979 and has an IMDb rating of 6.3. You can watch it on YouTube.

Ramsay Brothers’ Shaitani Ilaaka was released in 1990. An evil sorceress hunts for newlywed brides and feeds their blood to a Shaitaan, an ancient and fearsome demon. A couple tries to fight against her and is soon to meet the demon himself, making the plot scarier.

Shaitaani Ilaaka has an IMDb rating of 5.1, and you can watch it on Zee5.

Ramsay Brothers’ Mahakaal is about a vengeful ghost who starts haunting Anita, played by Archana Puran Singh, first in her dreams and then in reality. Later on, it is revealed that an evil magician Shakaal is behind it and is kidnapping and killing children to increase his evil power.

Darwaza is a Ramsay Brother horror film wherein a Thakur unintentionally kills Dharma and is now cursed. He sends his only son off to live at a safer place, who comes back to Haveli after getting married. But there’s a monster living just beside the Haveli, separated by just a darwaza. Will he kill Thakur’s son too? Well, you’ll have to watch the movie to find that out.

This movie was released in 1978 and has an IMDb rating of 5.4, but isn’t available on any of the OTT platforms.

When a convict gets out of jail and tries to kidnap Supriya, she sets him on fire in self-defence. The pages of the past get reopened and it is revealed that Supriya was once hypnotized by the convict through black magic and was forced to fall in love with him. Although she gets acquitted by the court, the convict’s soul starts to haunt her family.

Saaya was released in 1989 and starred Shatrughan Sinha and Poonam Dhillon in the lead role. Although it’s not under the banner of the Ramsay Brothers, it is directed by Keshu Ramsay. The movie has an IMDb rating of 6.3 and is available on YouTube.

A guy with an expensive ring goes to a guest house to meet a woman for exorcism. That night, he is attacked for the ring and his hand gets chopped off and he dies. Later, the hand returns to take his revenge.

This Ramsay Brother horror movie was released in 1980 and has an IMDb rating of 6.2. You can watch it on YouTube.

Ramsay Brothers have given us some really scary flicks, no wonder they created a cult following with these. If you want to spend your weekend getting spooked, you know what to watch!

FAQs about Horror Movies By The Ramsay Brothers

Who are the Ramsay Brothers?

Ramsay Brothers is a pseudonym or brand name used for a family of Bollywood filmmakers, the sons and grandsons of F.U. Ramsay.

What is the name of the seven Ramsay Brothers?

Kumar Ramsay, Gangu Ramsay, Tulsi Ramsay, Arjun Ramsay, Shyam Ramsay, Keshu Ramsay and Kiran Ramsay are the seven Ramsay Brothers, the seven sons of F U Ramsay. They became the undisputed kings of horror moviedom in Bollywood through the 1970s and ’80s.

What are the Ramsay brothers’ best horror movies?

Some of the Ramsay Brothers’ best horror movies include Veerana, Aur Kaun?, Do Gaz Zameen, etc.

What is the actual surname of the Ramsay Brothers?

The actual surname of the Ramsay family is Ramsinghani.

What did the Ramsay Brothers do before filmmaking?

The Ramsinghani family used to run electronics shops in Karachi and Lahore. Post partition, Fatehchand U. Ramsay (F.U. Ramsay) came with his extended family, including his wife, seven sons and two daughters, to India. They settled in Mumbai and opened a small electronics shop at Lamington Road.